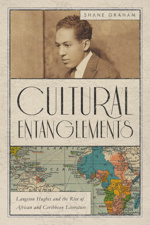 We are pleased to offer this blog post from UVA Press author Shane Graham, whose book Cultural Entanglements: **Langston Hughes and the Rise of African and Caribbean Literature was published this May.

The COVID-19 pandemic posed a challenge to my new book’s argument before it was even published, but the worldwide uprising now breaking out over police violence makes the subject of my study more relevant than ever.

Cultural Entanglements: Langston Hughes and the Rise of African and Caribbean Literature attempts to convey both the scope and depth of the black literary networks developed by the great American poet Langston Hughes. I document the letters, meetings, translations, anthologies, and mutual allusions connecting him to black and mixed-race writers around the world (especially Claude McKay, Jacques Roumain, Aimé Césaire, Peter Abrahams, Es’kia Mphahlele, and Paule Marshall). I thereby position Hughes as a world writer and a pivotal figure in the emergence of Caribbean literature as early as the 1920s and in the African literary “boom” of the mid-twentieth century.

To varying degrees and in varying forms, all these writers consciously followed what I call an “ethos of entanglement”: they sought out cultural exchange at concentric or overlapping scales (the local, the national, the racial or pan-African, and the global) and along different planes (the ancestral and the contemporary). This ethos contained several imperatives: “to recognize and accept a generalized condition of interconnection; to cultivate and organize the circuits of cultural dissemination and exchange; and to exploit its motility and flexibility, all in such a way that entanglement ceases to be a passive condition of history and becomes the conductive fabric out of which black solidarity and identity might be sewn” (7).

In their efforts to establish interconnecting networks across the black world and to develop a shared “aesthetics of pan-African entanglement,” Hughes and his network of writers took advantage of ever-accelerating developments in communications and travel technologies throughout the twentieth century. Telegraphs, telephones, radio and television, and airmail and commercial flight all combined to enable cultural exchange at a pace previously unimaginable. The increasing affordability of air travel in the late 1950s and 1960s was especially important for allowing arts festivals and literary conferences to grow into transient but crucial spaces of cross-cultural entanglement. Such generative exchanges in turn provided inspiration, source material, and claims to legitimacy for marginalized writers living under or escaping from colonialism and apartheid throughout Africa and the Caribbean.

In short, the faster Langston Hughes’s world moved, the more effectively he was able to cultivate a community of black artists writing from a common well of themes and tropes. I hope my treatment of those efforts is nuanced and even-handed; I acknowledge, for example, that circuits of cultural exchange involve a large degree of self-commodification and the flattening of cultural particularity in the service of a sometimes-essentializing conception of global blackness.

I confess, though, to not thinking through, in the naïve Before Time of the 2010s, the extent to which the most fruitful vectors for transnational cultural exchange are also the most effective vectors for the spread of a deadly virus. It is hard not to cringe now, for example, when I re-read my discussion of Kwame Anthony Appiah’s use of contamination metaphors to convey a “counter-ideal” to notions of cultural purity. The coronavirus has made it difficult in the present moment to think of contamination as anything positive or desirable.

Similarly, Hughes’s first voyage to Africa in 1923-24, as recounted in his first autobiography The Big Sea, reads differently when we consider that it happened just a few years after the 1918 influenza pandemic claimed at least 50 million lives worldwide. What’s more, in his last two decades he traveled constantly, met dozens of writers at festivals and conferences all over the world, and entertained a non-stop stream of visiting artists and dignitaries at his Harlem brownstone. Such activities were central to his evolving conception of blackness and pan-African identity; they are also precisely the sort of “super-spreader events” that might allow a dangerous pathogen to circulate among vulnerable populations worldwide.

Nevertheless, for Langston Hughes, his concentric and flexible vision of cultural entanglement, which privileged the pan-African scale but did not oppose or contrast it to other allegiances or identities, served as a life-saving antidote to an ill he saw as far more dangerous and insidious than any virus: white supremacy and its ethos of violent separation. Hughes saw the contagion of racism—for which Rev. Raphael Warnock recently coined the term “COVID 1619”—as fundamentally the same whether it paraded under the banner of apartheid, Jim Crow, or colonialism’s civilizing mission. To inoculate readers against the cultural negation of racism, Hughes and the writers in his sphere constructed a pan-African pantheon of rebels and leaders who became the founding fathers of a black Atlantic imagined community. For example, in his 1931 poem “Scottsboro,” about nine black teenagers falsely accused of rape in Alabama, Hughes lists many black heroes such as Nat Turner and Jean-Jacques Dessalines under the banner of “Fighters for the free.”

“Scottsboro” was written after eight of the boys had been convicted and sentenced to execution, but before the Supreme Court overturned the convictions and one of the accusers recanted her testimony. This poem and many others Hughes wrote at the time elevate the Scottsboro Boys to a global symbol of oppressed blackness—“Scottsboro” begins and ends with the refrain “8 BLACK BOYS IN A SOUTHERN JAIL. / WORLD, TURN PALE!” Similar impulses drive the global outpouring of protest unleashed by the killing of George Floyd, who became a transnational figure with remarkable speed. His story resonates for example in France, where Floyd’s murder sparked renewed protests against the asphyxiation death of Adama Traore in police custody in 2016, and in Brazil, where police in Rio de Janeiro alone killed over 1800 people in 2019, 80% of them black.

Langston Hughes gave us a blueprint for circulating precisely such stories of black suffering and resistance at a global scale, for generating bonds of solidarity around the world, and for staking a claim for black people’s contributions to modernity. The breathtaking pace at which cultural exchange can happen in the Internet age would astonish Hughes, but if he were alive today, he no doubt would quickly learn to use Twitter to further his ethos of pan-African entanglement. That ethos would (and does) resonate today, amounting in effect to an insistence that black lives matter, everywhere.