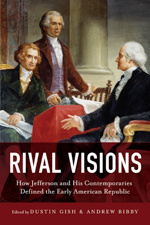 We are pleased to offer this guest blog post by Dr. Dustin Gish, coeditor with Andrew Bibby of RIVAL VISIONS: How Jefferson and His Contemporaries Defined the Early American Republic to be published in February.

This past week in America we have been witnesses to an appalling event in our national history. Words matter, and ideas have consequences. Rival visions have agitated American national politics from the beginning. The revolution of 1776 tested whether our enduring political commitments would be grounded upon inherited views determined by consanguinity, tradition, and chance, or would be animated by visions for a new American republic defined by principles, reason, and choice. Subsequent presidential elections—from Thomas Jefferson to Abraham Lincoln and Ulysses S. Grant—confirmed that, even when vexed by deep or hostile divisions, this nation rests upon a foundation and a constitutional order that ensure this republic shall endure; if, that is, we adhere to its guiding principles in the pursuit of justice and the equal protection of rights under our laws, even as we strive to correct its flaws and strengthen our union.

Rival visions cannot be avoided in a free republic, but their contestation must abide by republican rules. The articulation of opposing arguments, whether of a majority or a minority of the people, must be reasonable in order to be rightful. The assault on and breach of a Congress flush with Senators and Representatives at work cannot, and must not, be forgotten. Not only an iconic symbol but the constitutional substance of our popular sovereignty has been attacked. In our republic (if we can keep it), this violation strikes at our core principles. Legitimate political authority in a republican form of government is exercised not through insurrection but persuasion, not through the threat of mob rule but self-government. The ship of state requires prudent leaders at the helm and responsible citizens pulling oars, for ours is a government of laws and not of passions. Threats—whether posed in speech or in deed—to the constitutional rule of law in our republic must be met with vigilance.

President-Elect Biden (and his speech-writers) in his upcoming inaugural address on January 20 will surely reach back into the past for inspiration in summoning the eloquence needed to meet this critical moment in our nation’s history. The rhetorical presidency must be for us once more a beacon of light and guidance in a time of crisis and national darkness. Speeches of President Jefferson and President Lincoln at their first inaugurals come quickly to mind, and, perhaps even more fittingly, the words of Washington in unmasking false claims of patriotic zeal and suppressing insurrections, first by debunking conspiracy among the ranks of the Continental Army in 1783, and again, as President, when facing down “insurgents” (as he called them) during the whiskey rebellion of 1794.

The U.S. Capitol building is a soaring symbol of legitimate popular authority, its majestic dome finished by order of Lincoln during our national crisis and rising over the district that bears the name of Washington. It must not be assaulted as if it were the Bastille in Paris in 1789. The Spirit of ’76 and the American Revolution will always be the touchstone for principled resistance to tyranny, but the violation that we witnessed last week—to subvert by force the constitutional certification of electoral votes in a presidential election—looked like a parody of a scene from the French Revolution. Parodic not because the intent and actions of the protesters were in any way laughable and defensible (they were not), but because the French revolutionaries sought to overthrow centuries of oppression and injustice (as Jefferson himself famously affirmed in writing that “rebellion now and then is a good thing” and that “the tree of liberty must be refreshed from time to time with the blood of patriots and tyrants”).

Following the intensely contested Election of 1800, with its rival visions of the future of the young American republic vigorously articulated in vitriolic rhetoric, the incoming President-Elect understood his inaugural address had to restore a sense of unity. The war of words fought through heated ‘campaigns’ in ‘battle-ground’ States must end, said Jefferson, once the votes had been cast: “the contest of opinion through which we have passed” having been “decided by the voice of the nation, [and] announced according to the rules of the Constitution, all will, of course,” he asserted with faith in the reasonableness of his fellow-citizens, “arrange themselves under the will of the law, and unite in common efforts for the common good.” So too must we all.

But the times now seem ominously more like 1861 than 1801. President Lincoln hopefully said, in his inaugural address, as confederate agitators and insurgents precipitated civil war: “We are not enemies, but friends. We must not be enemies. Though passion may have strained, it must not break our bonds of affection.” Differences of opinion cannot be allowed to become violations of principle. Impassioned opinions must be scrutinized for the veracity of their assertions and submitted to the bar of public reason. And the rhetoric of radical political intolerance, which distorts reason and incites violence, must be firmly rejected. Rival visions inflamed by passion and mis-information can still break to new mutiny, making civil hands unclean with civil blood. So even as we wish for the best, we must also be vigilant and prepared to support and defend the integrity of our republican institutions. Let us not abandon our fundamental commitment to the constitutional principles that define us as a republic.

We anxiously await now as we have in the past an exhortation in words, as well as an example in deeds; words animated by that noble vision of an American republic which our founders first conceived and established, and to which later reformers remained dedicated in advancing liberty, justice, and equal rights for all. What we hope to hear, therefore, as our nation lingers on the verge of further civil discord, is a redeeming vision of our republic that will strengthen the state of our union and encourage the chords of civic spirit to be again touched by the better angels of our nature.