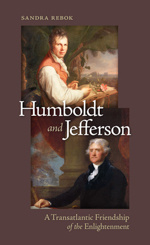 Putting Enlightenment Science into Practice: Humboldt, Jefferson, and the Transatlantic Fight against Smallpox

A guest post by Sandra Rebok, author of Humboldt and Jefferson: A Transatlantic Friendship of the Enlightenment.

As 2020 turns into 2021, the role of the sciences in society and the importance of target-oriented scientific progress have been visible on all media channels. The need for close and well-functioning ties between scientific evidence and political decisions, when it comes to overcoming health challenges caused by pandemics, has been at the center of many discussions. This, however, is nothing new to our historical moment. A look into Alexander von Humboldt’s and Thomas Jefferson’s times provides an insightful example of how these connections were of the same importance and societal relevance in the past. In addition, this glimpse into the past gives us an inspiring example for transatlantic collaboration aimed to benefit society: Looking at the challenges caused by the infectious diseases of their times – such as smallpox, but also yellow fever and the plague – and the solutions elaborated at the intersection of science and politics is helpful in order to draw insightful lessons from the past. Just as today, these diseases neither took the borders of nations into account nor were the concerns and hopes of the people substantially different on either side of the Atlantic. These health and societal challenges, in fact, connected the continents in multiple ways.

In 1808, referring to an expedition carried out by the Spanish Crown, Alexander von Humboldt wrote in his Political Essay on the Kingdom of New Spain: “The voyage of Mr. Balmis will thus remain for ever memorable in the annals of history.” The expedition that received such a tribute from the famous explorer was the first major vaccination campaign, the Royal Philanthropic Vaccine Expedition (1803–1806), led by the Spanish military physician Francisco Javier de Balmis y Berenguer (1753–1819). Vaccination, a much safer way to prevent smallpox than older methods such as inoculation, had been introduced only a few years earlier, by the English physician Edward Jenner (1749–1823). In 1798, Jenner had published the results of his research under the title An Inquiry into the Causes and Effects of the Variolæ Vaccinæ (1798), followed by two other books on this topic: Further Observations on the Variolæ Vaccinæ, or Cow-Pox (1799) and A Continuation of Facts and Observations Relative to the Variolæ Vaccinæ, or Cow-Pox (1800). For his part, Balmis had devoted much time and energy to medical research, focusing especially on venereal diseases. For several years he had worked as a hospital surgeon in the city of Mexico and had at the same time investigated local flora and traditional remedies used by Indigenous peoples, which led to the publication of Tratado de las virtudes del agave y la begonia (1794). During his time in New Spain he had also witnessed the terrible effect of smallpox on the local population.

After his return to Madrid Balmis became the physician of King Charles IV, whose daughter Maria Teresa died from smallpox in 1794, as had his brother Gabriel a few years earlier, along with his wife and their new-born son. Through this personal tragedy the monarch was certainly more sensitized to the tremendous impact the health crisis had in the Spanish colonies than he otherwise might have been. Shortly after Jenner had begun developing the smallpox vaccine, Balmis developed his plan to take the new vaccine to North America, South America, and the Philippines. The purpose of this mission, considered to be the first international healthcare expedition in history, was to put the latest scientific advances into practice in order to end the high mortality caused by this disease in the Spanish empire. So as to achieve this goal, people were going to be trained on site to use the vaccination method, and another part of the strategy involved setting up vaccination centers. Balmis obtained the approval and generous support of Charles IV for his plan, but one important logistic problem had to be solved first: the vaccine had to be kept viable during the entire expedition. Balmis found a solution in the form of twenty-two orphaned children, who served as a vaccine transmission belt. Although his expedition faced numerous obstacles in the colonies, given a certain suspicion among both local officials and resident populations, it was successful and eventually saved a large number of lives.

The Balmis expedition arrived in New Spain in August 1804, only a few months after Humboldt had left this viceroyalty on his way to Cuba and from there to the United States, where he would meet President Jefferson in June of 1804. Humboldt had observed the devastating impact of smallpox in Spanish America and showed his deep concerns in his Political Essay on the Kingdom of New Spain, describing the different efforts that had been over time made to protect the population. Interestingly, he not only summarized the history of vaccination from a European perspective but also pointed to the Indigenous knowledge found in colonial America. Based on this personal experience, he was optimistic, both regarding the outcome of Jenner’s work in general and the Royal Philanthropic Vaccine Expedition in particular. His prediction regarding the Spanish vaccination campaign, however, proved wrong—rather than remaining “for ever memorable in the annals of history,” it was quickly forgotten, even in Spain—until the military operation supporting the fight against COVID 19 was named “Operación Balmis.” In Balmis’ times, however, it received much attention as a scientific experiment, but also as an expression of the political elite’s health concerns. In England, Jenner himself was thrilled when he learned about this vaccination expedition: “I don't imagine the annals of history furnish an example of philanthropy so noble, so extensive as this,” he wrote in 1806 to a friend.

For his part, Thomas Jefferson was an early advocate of the smallpox inoculation; he had already obtained this protection in 1766. Then, from the start, he was one of the strongest supporters of the new vaccination method in the United States, an effort that in turn was recognized in 1803 by the recently founded Royal Jennerian Society for the Extermination of the Small-pox in London.[[1]](https://www.upress.virginia.edu/2021/01/04/sandra-rebok-bringing-enlightenment-science-practice#_ftn1) Note, for example, that in the long list of instructions that Jefferson passed to Meriwether Lewis for what was going to become the Lewis and Clark expedition (1804—1806), he advised him not only to vaccinate members of his party against smallpox but also to instruct Indigenous peoples on the use of this practice.[[2]](https://www.upress.virginia.edu/2021/01/04/sandra-rebok-bringing-enlightenment-science-practice#_ftn2) In other words, Jefferson, too, added a version of an early vaccination campaign to the tasks of this exploratory voyage. In 1806, he wrote in a letter to George C. Jenner, Edward Jenner’s nephew, who applied his uncle’s method and vaccinated thousands of people: “Medecine has never before produced any single improvement of such utility.”[[3]](https://www.upress.virginia.edu/2021/01/04/sandra-rebok-bringing-enlightenment-science-practice#_ftn3)

The political authorities’ enthusiasm for this new medical breakthrough, on both sides of the Atlantic, was closely connected to the common goal of the Age of Reason: generating knowledge that could be used for societal progress was at the core of Enlightenment sciences. Both Humboldt and Jefferson, albeit from different angles, are excellent examples of how this general pursuit was put into practice. Promoting scientific inquiry in order to address the challenges of their world, and implementing the outcome for the benefit of humanity was their vision of science's place in society.

Infectious diseases had had a disastrous impact on societies worldwide, not only by acting in a cruel way on people’s lives, but also by being a threat to societal development in all parts of the globe. Both Jefferson and Humboldt had observed the consequences with their own eyes and hence both saw this as a challenge for the sciences to solve, on a global level. A health crisis caused by infectious diseases always expands beyond the border of nations; it thus needs to be understood as an international task requiring collaborative effort to address and solve. This was the case then, at the turn of the nineteenth century, when smallpox and its vaccination strengthened both transatlantic connections writ large and the personal ties between scientists, explorers, and political decision makers. And this is the way it ought to be approached in our times.

It would be interesting to know if either Jenner’s medical breakthrough, or the way it was practically applied by the Spanish crown, was a topic of conversation during Humboldt and Jefferson’s personal encounters in Washington. Unfortunately, the existing records do not provide an answer. Nevertheless, it is very likely, given the concern both historical figures shared in this regard, that they might have exchanged thoughts on the promising scientific developments of their day.