The Busiest Week That Never Was

The Busiest Week That Never Was 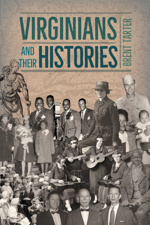 By Nadine Zimmerli, editor for history and social sciences

Last week was supposed to be my busiest yet since assuming the mantle of editor of history and social sciences here at UVa Press. I had been looking forward to attending my first Virginia Forum, on “Crafting History,” which—I’m given to understand—would have involved an evening presentation on the equally important topic of “Crafting Beer” at one of my favorite Richmond breweries on March 26. Then, the Thursday thereafter, precisely a week later, I was bound for Washington D.C. to set up our booth at the OAH and immerse myself in its rich offerings on this year’s theme of “(In)equalities.” Two conferences in the span of seven days, with a visit to George Mason University thrown in for good measure the Monday in-between—I was set to seize spring in the most intellectually rewarding way possible!

Now, I’ve two furry office mates who are very interested in the manuscripts I’m reading and offer constant commentary that ranges from Meow to Mrrooww, with the occasional German Miau in the mix (they’re bilingual, just like me), but their conversation pales in comparison to the stimulating chats I was looking forward to having in Richmond and D.C. last week.

At the Virginia Forum, I was going to attend a session in every time slot and fully immerse myself in the various facets of Virginians and their histories—from women at Jamestown to the state’s suffragettes, from Natives and newcomers during the colonial and founding periods to Indigenous polities and politics today, from the African Americans who endured slavery to the Virginians fighting for Civil Rights—and to meet the teachers, archivists, curators, interpreters, librarians, and professors who study the Old Dominion from all angles across four centuries. UVa Press serves the state of Virginia and all its institutions in it, so I am eager to learn about current book projects that enrich our offerings on Virginia’s deep history and vibrant and ever-evolving culture.

And speaking of Virginians and their Histories, I was especially looking forward to Brent Tarter’s conversation with John Kneebone, Jennifer Ritterhouse and Elizabeth Varon about his new book, which we’re publishing next month. Since I wasn’t able to share the page proofs at the booth last weekend, I invite you to browse an excerpt here.

When perusing the Forum’s program, I was not only struck by the wide range of topics but also by the attendees’ innovative methodological approaches. At both the Friday and Saturday lunch sessions, for example, Warren Hofstra, Kevin Hardwick, and their team of collaborators were going to demonstrate their virtual reality project “Re-Debating the Electoral College.” I wouldn’t have minded donning an Oculus Rift to delve into the 1780s!

Luckily, I might still get the chance later this year, when the Forum is set to gather on its rescheduled weekend of September 17–19. I look forward to meeting and learning from all Virginia historians then, to continuing the Press’s long-standing support of graduate students by sponsoring the Graduate Paper contest, and of course to tasting that craft beer on opening night!

At the OAH, I’m sure I would have enjoyed a cocktail or mocktail at one of the many receptions as well. Unlike the Forum, I wouldn’t have been able to attend a session in every time slot but split my time between attending select sessions and hanging out at the booth to talk to scholars about our spring publications and our long-standing series in American history, from Early American Histories and Jeffersonian America to A Nation Divided: Studies in the Civil War Era and the Carter G. Woodson Institute Series. I was particularly looking forward to inviting attendees to pick up our Press tablet to browse our digital scholarship offerings through Rotunda, which provides access to a wide variety of primary sources from the founding era through the Vietnam War.

UVa Press is well known for publishing monographs, edited collections, and crossover titles in Early American history and the Civil War era, as well as late 20th and 21st presidential studies, and I’m always happy to meet authors old and new who work in these fields. On the OAH program, I was therefore especially intrigued by the panels sponsored by the Omohundro Institute and SHEAR, respectively, and the various offerings on Native American history. In addition, it is one of my goals to connect American history across the centuries, especially with an eye toward transnational links and influences, since I came of (scholarly) age at the height of the transnational turn and my own research focuses on Americans abroad. So I would have tried to attend panels along the lines of the one on “U.S. Responsibilities at Home and Abroad in the 1970s” or the one on “Black Women in Motion.”

Most importantly, at the OAH, much like at the Virginia Forum, I was hoping to connect scholars to scholarship, to chat with attendees about their current research projects, to listen to and encourage junior academics, to learn from senior ones, and to discuss the latest trends in various subfields and across the history discipline with all.

Luckily, modern technology allows me to forge the intellectual connections and have the stimulating conversations that arise organically in these conference settings in a virtual way. (On a side note, the East German kid in me who marveled at the telephone in the early 1990s, when my family finally got its own line, is beyond amazed at email, Zoom, and WhatsApp, trust me!) I encourage all of you who would have stopped by the UVa Press booth to shoot me an email with questions you may have, to share your conference papers, and to start a conversation. As much as I appreciate my cats’ efforts, their takes on American history across the centuries are not as interesting as any message you send me—I’d love to hear from you and meet you!