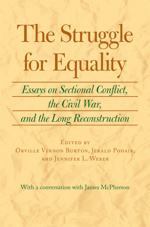 UVA Press is proud to celebrate Vernon Burton, co-editor - with Elizabeth R. Varon - of our series The American South Series and A Nation Divided: Studies in the Civil War Era, who has been awarded the 2022 John Hope Franklin Award for Lifetime Achievement in Southern History by the Southern Historical Association (SHA).

The SHA released the following statement: “The John Hope Franklin Award is made every five years in recognition of an individual who has not only made outstanding contributions to scholarship on the American South but also exhibited the qualities of citizenship embodied by the award’s namesake.

In making its determination, the prize committee pointed specifically to Burton’s tireless contributions to ‘vital questions of public policy as an expert witness on redistricting, civil rights, and voting rights.’ At the award ceremony in Baltimore, SHA President Steven Hahn of New York University added a personal note when handing Burton the award: ‘I first became acquainted with the awardee when I was still in graduate school and he was barely past it,’ Hahn said, ‘owing to his pioneering scholarship in social history and quantitative analysis, and his generosity in helping those of us along who shared his interests. Over the years he has been an inspirational model not only of scholarly excellence but also for his remarkable teaching at the undergraduate and graduate levels, and, especially, for his deep commitment to social justice. I can think of no one who is more deserving of what is the SHA’s most coveted award.’”

UVA Press director Eric Brandt added: “As a series editor, as well as editor of the groundbreaking anthology, The Struggle for Equality and the forthcoming Reconstruction at 150, Vernon Burton has been instrumental to the University of Virginia Press in becoming a leading publisher of American History. We treasure his commitment to our mission and will be forever grateful for his loyalty and guidance. We are proud to be part of his legacy and congratulate him for this well-deserved lifetime achievement award.”