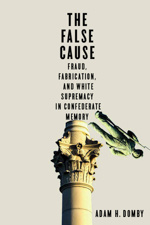 Virginia’s removal of the Robert E. Lee statue from Monument Avenue in Richmond this week made national news. Adam H. Domby, associate professor of history at Auburn University and author of The False Cause: Fraud, Fabrication, and White Supremacy in Confederate Memory, here offers his take on the monument’s history and Lee’s true legacy.

As I discuss in The False Cause, Confederate monuments like this one were clearly tied to white supremacy from the time they were erected. As I examine in depth in the book, consciously constructed lies pervaded collective memories of the Civil War from Reconstruction down to the present. Let me take up here one particular myth about Lee that those defending Confederate monuments have pushed recently to show that monuments don’t teach history—rather, they erase the past for present needs. Looking to defend the Lee monument, many neo-Confederates and those advocating to keep monuments like his in place have claimed that Lee facilitated reconciliation after the war.

In its most recent iteration, this myth claims that Lee did more for reconciliation than perhaps anyone else. Indeed, even Donald Trump issued a statement to this effect after the Lee statue came down. Unfortunately, it included a variety of ahistorical and false pronouncements, including that “except for Gettysburg” Lee would have won the Civil War and that Lee would have defeated the Taliban(!) But the one that stood out to me was that Trump claimed that Lee was “perhaps the greatest unifying force after the war was over.” If this is what monuments like the Lee statue on Richmond’s Monument Avenue taught Trump and other defenders of Confederate statuary, then these monuments clearly failed to teach accurate history.

Today’s Neo-Confederates often cite Lee as an advocate for racial reconciliation and frequently repeat a story about Lee taking communion with a Black man after the Civil War. But as Andy Hall has shown, this story is an evolution of an older myth that Lee and other white members of St. Paul’s Episcopal Church had taken communion while ignoring a Black man who had knelt alongside them, thus showing their “superiority” to the African American who had the temerity to try and take communion with them. The Black man was never given communion. Not only is the story likely entirely fabricated, it was first used in 1905 to "prove" Lee's devotion to white supremacy and opposition to Black equality and only evolved later to claim the opposite.

But we don’t need made-up tales to know Lee’s views on race and reconciliation. After the war, Lee remained convinced of white superiority and openly spoke about his views. Pushing for the return of white rule in the South in 1866, he testified to Congress that: “I do not think that [the Black man] is as capable of acquiring knowledge as the white man is.” Asked how whites would respond to Blacks being given the vote, he responded that “I think it would excite unfriendly feelings between the two races” before eerily menacing “I cannot pretend to say to what extent it would go, but that would be the result.” Indeed, Lee preferred that Virginia might have a smaller number of congressman than to give the vote to Black men. Lee didn’t stop there, going so far as saying “I think it would be better for Virginia if she could get rid of” the state’s Black population. As some scholars have pointed out, Lee was arguing for ethnic cleansing—not exactly something I would personally deem worthy of celebration.

After the war Lee was certainly making little to no effort to protect African Americans around him. While Lee was president of Washington College (now Washington and Lee) his students sexually assaulted Black girls without ramifications and started their own chapter of the Ku Klux Klan. When Lee bothered to address racist harassment he treated it as a minor transgression, as a crime less serious than when students threatened to take a holiday. Only if you ignore Black southerners as part of the United States can you imagine that Lee facilitated reconciliation and was a unifying force.

Ironically, perhaps the one thing Lee did say that fostered any sense of reconciliation was to oppose the erecting of Confederate monuments. In 1869 he wrote that it was better “not to keep open the sores of war but to follow the examples of those nations who endeavored to obliterate the marks of civil strife, to commit to oblivion the feelings engendered.” On the surface, Lee seemed to have wished to forget the war, something neo-Confederates now accuse those seeking the removal of monuments of desiring. Although advocates for taking down Confederate monuments love to cite this speech as evidence that Lee opposed statues, in reality it was a matter of timing that drove Lee, not an aversion to celebrating the Confederacy or any evolving views on white supremacy.

His opposition to monuments in the 1860s was a political calculation as he recognized attempts to celebrate the Confederacy would lead to outrage in the North and might extend Reconstruction. Lee wanted southern whites to regain political control as soon as possible. Yet erecting monuments in 1869 threatened that.  It seems likely his view of monuments might have changed had he lived to see Jim Crow firmly established. Indeed in 1866, he had written:

As regards the erection of such a monument […] my conviction is, that however grateful it would be to the feelings of the South, the attempt in the present condition of the Country, would have the effect of retarding, instead of accelerating its accomplishment; & of continuing, if not adding to, the difficulties under which the Southern people labour. All I think that can now be done, is to aid our noble & generous women in their efforts to protect the graves & mark the last resting places of those who have fallen, & wait for better times.

That last line especially is, to me, indicative of his true feelings. By “wait for better times” Lee meant that when white southerners (the only group Lee included in “the southern people”) were no longer under Reconstruction and occupation by U.S. Army troops (what Lee meant by the “present difficulties”), then monuments would be appropriate.

Even Lee’s opposition to monuments was about defending white supremacy. At some level Lee understood that monuments seek to demonstrate who controls public spaces; erecting them too early would raise the ire of those who opposed the return to power of former Confederates. Lee died in 1870, never seeing the disenfranchisement of Black southerners or the rise of Jim Crow (Lee’s “better times”) that led to the subsequent widespread erection of Confederate monument.

Monuments do not teach history. Indeed, monuments celebrating Lee seem to have obscured the past rather than informed the public. They hide the fact that Lee committed treason, took up arms against the United States Army in an effort to create a slaveholders republic, and at times even that he was defeated. Lee’s army committed war crimes, enslaved free people, and refused to treat Black prisoners as POWs. Monuments help hide these facts by telling us that this is a man worthy of looking up to.

Monuments teach people who to admire. Until the removal of Lee’s statue this week, viewers were forced to literally look up to him on Monument Avenue. But was the real man worthy of the monument he received? Did he represent the city of Richmond’s values in the twenty-first century? The statue certainly represented the values of those who put up the monument as part of residential development that banned African Americans from buying houses.

Monuments seek to silence the voices of those men and women whom Lee enslaved, who recalled him as an especially cruel and harsh oppressor who separated families. The truth about who Lee was as a man (flawed, racist, and loser—at least when it came to the Civil War) is erased by monuments that present him as perfect. It is hardly surprising that defenders of these monuments frequently struggle to identify the root causes of the war they celebrate.

The Lost Cause has long distorted the past in an effort to uphold white supremacy, but for just as long others have opposed this erasure of the past. As I note in my book, in 1929 while reporting on how former Confederates were trying to rewrite history, a Black journalist observed that “the lost cause was not only lost but misguided and God-forsaken.” Yet monuments like the Lee statue in Richmond sought to suppress any viewpoints that pushed back against the Lost Cause’s narrative of history, a narrative premised upon lies and white supremacy. Who knows? Perhaps fewer monuments venerating this Confederate general will lead to a more accurate assessment of the man and his cause.