We Have Come to Praise Globalization, Not Bury It

We Have Come to Praise Globalization, Not Bury It 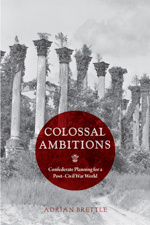 UVA Press author Adrian Brettle, whose book COLOSSAL AMBITIONS: Confederate Planning for a Post–Civil War World was published this July, writes about the history of globalization and the dangers of it being under attack.

We live at a time when globalization is under attack, blamed for both enabling the apparently dangerous rise of China and endowing big tech with power to limit free speech, and now castigated--through the facilitation of mass movement of people--with the rapid spread of the novel Coronavirus. History shows us that in the past we praised and blamed a development that few bothered to understand and define. Consequences of this could be disastrous. Relying on globalization’s vague abstractions helped statemen conduct policy based on a lethal combination of cynicism and naivete, and go on to make catastrophic mistakes.

Globalization has a long history. Back during the American Civil War, Confederate leaders believed globalization would confirm the wisdom of their bid for independence. They believed globalization had made them the indispensable nation for the world economy. Secessionists would not have dared to break up the United States otherwise. The Confederacy joined a number of powers in history, whether in positions of weakness or strength, which considered that other countries would respond to trade deals. Their statesmen consider that other nations are venal, while theirs’s was virtuous. They are passionate believers in the civilizing aspects of commerce. Above all, that trade trumps human rights, and in the Confederates’ case, this provided an antidote to the poison with which slavery infected, as they well knew, their international relations.

Confederates possessed a very selective view of globalization’s benefits and costs. In the 1850s, as part of the United States, southern slaveholders had avoided the worst of the international economic panic of 1858, moreover, the massive immigration flows of the period also by-passed the South. Slaveholders conceived that globalization was just about the opening of world markets facilitated by a communications revolution, the widespread adoption of technology – railroads, steam powered ships, steam printing press, the telegraph-- that made people giddy with excitement that the world was becoming smaller and time itself was passing by faster and faster.

Statistics delighted the slaveholder: the prices of cotton and enslaved people rose and cotton production soared. All of this data selectively pulled from various sources, proved to Confederates’ satisfaction that not only was the North of the United States already dependent on the southern production of commodities, in turn reliant on slavery, but so was the rest of the industrializing world. Moreover, this situation was just the beginning of a promising trend: in time, textile manufacturing would spread from western Europe and New England to factories in China and other potential markets. Meanwhile slavery under Confederate stewardship would expand into mining, lumber and other resource-extractive enterprises. A world vision that suited them, one where countries would not seek economic independence but interdependence, a triumph of the abstract theory of comparative advantage in political economy, the binding together of nations with their foremost international customers and suppliers.

This selective, materialist belief that the forces of globalization were working in Confederates’ favor, would serve to safeguard slavery in the future. Confederates believed that the nations of the world, with the United States, Britain, and France, at the head of the queue, were eager to negotiate commercial pacts with the slave power. The direct relationship of customer and supplier (removing middlemen in New York and Boston) would lead to acceptance of slavery. Confederates made the not uncommon mistake of assuming that while they alone had a purpose in the world of virtue and improvement (exports of cotton to clothe the people of the world would spread ‘civilization’ abroad while they also expected to ‘develop’ the tropics with the expansion of slavery). Meanwhile, European countries were prepared to sacrifice all morality, even gamble on the possibility of a war with the United States, in order to get hold of cheap cotton; in any event, Confederates persuaded themselves, the Europeans might not be risking much, as the silent majority in the North would soon vote with their wallets to end the Civil War.

What lessons do these miscalculations offer todays would be diplomats and trade negotiators? That national sentiment and morality overrides international self-interest. In Britain, empire triumphed over free trade as colonials and millowners stepped up efforts to develop cotton production in India rather than continue to be dependent on southern cotton. The government in London was prepared to put up with mass unemployment and underemployment in Lancashire instead of being seen to be succumbing to blackmail or conducting foreign policy for barefaced economic reasons.

As for the United States in the Civil War, the abstractions of globalization vanished before saving the Union—with its promise, however imperfect--but in the mid nineteenth century truly revolutionary--, of democracy, equality, and ending slavery. The message now is that by understanding how Confederates got so carried away by globalization, it would be equally absurd to blame it for our present woes.

Adrian Brettle is lecturer in history at Arizona State University. His book, Colossal Ambitions: Confederate Planning for a Post-Civil War World, was published earlier this summer by the University of Virginia Press. He is currently working on a project about how the gold rushes of the nineteenth century drove state formation around the world.