Author's Corner, and much more with Jacques Berlinerblau, author of THE PHILIP ROTH WE DON'T KNOW

Author's Corner, and much more with Jacques Berlinerblau, author of THE PHILIP ROTH WE DON'T KNOW 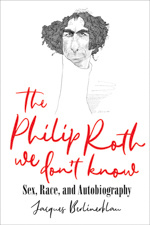 We're continuing the series with a conversation with Jacques Berlinerblau, author of THE PHILIP ROTH WE DON'T KNOW: Sex, Race, and Autobiography (September).

You can also read more from Berlinerblau - and his former student Audrey - at The Philip Roth Society on how a younger woman reader thinks about #PhilipRoth, misogyny, #MeToo and literature. And read an early review of THE PHILIP ROTH WE DON'T KNOW in The Guardian.

I’ve taught Roth to undergraduates for nearly three decades running. In recent years I started to notice that a growing percentage of my students weren’t “vibing” with his fiction anymore. The disconnect was particularly acute in relation to his representations of gender and race. In fact, I experienced something of a (very civil) classroom insurrection while teaching The Dying Animal back in 2017. Some of my best students were deeply troubled by Roth’s representation of David Kepesh’s assignations with Consuela Castillo. These were really bright young people, serious readers of literature. Contrary to stereotypes of “woke” Social Justice Warriors run amuck, they were thoughtful and diverse in their views. Yet that class did raise a question for me which I think Roth’s (much older) cheering section in the media might have missed: is his legacy assured?

If The Youth felt this way, then what might be the fate of his literary posterity?  I wanted to confront their concerns about gender and race head-on--concerns which I believe are quite valid. At the same time, I wanted to draw attention to less well-known components of his work. Maybe future generations will derive pleasure from what I called “Roth unsexed.” There are many rarely recognized, or completely unrecognized ideas, and themes in his work. I want to introduce my readers to them.

I proved to my satisfaction (and I hope to that of others as well) that Roth was a highly autobiographical writer. Remember: he denied this at every turn and ridiculed critics who dared suggest as much. What, then, are we to make of the representations of women in his fiction if so many of those representations are based on real people?  On the more theoretical level, Roth’s fiction poses a question--quite self-consciously--about the relation between an artist’s life and his or her art. That query, by the way, is one of the key concerns of #MeToo as it wrestles with the dilemma of art created by “monstrous men.” So there’s an odd conceptual synergy there between Roth’s fictional approach and the interests of this movement.

All that time spent in the Roth archives in the Library of Congress made me abundantly aware that Mr. Roth was a hustler, a player, a careerist. He worked the literary establishment something fierce; he logrolled; he backscratched; he networked. And he was quite skilled at it! There is no shame in any of that. Yet it does disrupt our (or is it just my?) image of him as a recluse who worshipped at the Altar of Pure Art. Put it this way: he might have been an autobiographical writer, but there is no single scene in his 8500 pages of fiction in which a writer lobbies on behalf of another writer for an award, fellowship, or teaching position with the confident expectation that the favor will be returned.

On another note, all of that networking Roth performed left its physical residue in letters, correspondences, and even fictionalized depictions of episodes he describes in those communications. As you may know, my colleague Professor Aimee Pozorski and I co-authored a letter in which we implored the Roth estate not to destroy those materials. Much of it, I believe, is in the possession of his official biographer. Those materials need to be made available to professional scholars.

I guess I’d point to the many correspondences I found in the Roth archives. So much oddball stuff. Someone swearing that Roth told him he wanted to start doing stand-up comedy; a letter from the Colorado Whiffleball Federation inviting Roth to participate in the First Annual Colorado Whiffleball Federation State Tournament; and all those variant texts of The Ghost Writer where Roth imagines a libidinous, sexed-up Anne Frank who, in these unpublished versions, really was Anne Frank!

I see the present book as the first in a trilogy covering my three loves: literature, comedy, music. The next book is about comedians who cross the line, who end up being censured, or cancelled, or in some cases killed. Like Philip Roth, I am obsessed with transgression and its consequences.