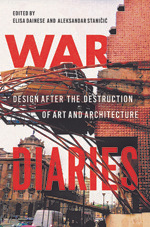 Today, we are happy to bring you our conversation with Elisa Dainese and Aleksandar Staničić, editors of WAR DIARIES: Design after the Destruction of Art and Architecture.

The book was conceived during our research fellowship with the Italian Academy for Advanced Studies at Columbia University. While the theme of the fellowship recognized the peril and acute urgency of purposeful destruction of art and architecture in contemporary conflicts, our intention with War Diaries was to explore the power of design to offset the grim conditions and trauma experienced during and after such struggles. We want the book to foreground the imaginative, humane, and moral dimensions in postwar urban reconstructions by creating a platform for conversation between people from different cultural backgrounds. Hence, the premise we started from was that artistic and architectural design have unlimited potential to remediate the consequences of violence.

The most important lesson we learned from this book, and hopefully our readers will pick up as well, is that design is not an extraneous expense available only to the privileged or an afterthought of reconstruction processes. Design is a necessity even during times of war or emergency. Especially when they are emblematic of a specific cultural identity, beauty and design are basic human needs, the source of life energy and the key to survival of displaced people as well as refugees. Early (re)construction decisions are often irrevocable, and if design concerns are disregarded from the start, they can perpetuate and even accelerate the destruction started by violence. As such, concerns about design and aesthetics should be addressed much earlier in postwar urban and social renewal, concurrent with the onset of reconstruction efforts.

At the beginning of this project we expected discussions to focus on design techniques, the practical aspects and tools of artistic and architectural production. We soon discovered that it was virtually impossible to consider design without addressing the culture, politics, and ethics of intervention. To our surprise, most authors framed their narratives by investigating the socio-political context of specific design interventions, emphasizing both the positive and negative consequences and broader impact of design. This is a testament to the fact that while many social and political sciences are experiencing a “spatial turn,” architecture and other similarly creative disciplines are trying to (re)affirm their socio-political relevance.

Building and rebuilding after war are endeavors that imply a process which can take months and even years to be completed, and documenting reconstruction requires acknowledging the inherently dynamic nature of the process. Several of the authors who contributed to War Diaries had to update their essays several times over because they were describing active situations that outpaced the publishing process. Although including more recent developments shed new light on such ongoing discussions and put them into perspective, it proved impossible to rewrite entire chapters, and we relied on postscripts in many instances to bring readers up to date. This strategy served the purposes of the book, but also put the reconstruction timeline into stark perspective, proving once more that there is a real measure of urgency when addressing design after the destruction of art and architecture.

As conflicts around the world continue to intensify—witness the unfolding invasion of the Ukraine, bombings of Palestine, proxy wars in Syria and Yemen—design responses will continue to develop, and an updated edition of this book, expanding on the geography and composition of case studies, seems a sadly concrete possibility. Perhaps more significantly, for us and all the practicing architects heavily involved in processes of education, thinking, and making, the book’s implicit challenge would be to jump into the battlefield ourselves. As educators we are dedicated to transmitting such on-the-ground knowledge to our students. We are similarly intrigued by the idea of getting involved in live reconstruction efforts as practitioners in the field, an experience that might compel us to write our own “war diaries” dedicated to design following the weaponization of art and architecture, documenting the ripple effects of this new arena of warfare—the transmission of fear; the destruction of memory and culture; the eradication of homes; and oppression, occupation, and displacement for the sake of creation of new socio-spatial realities.