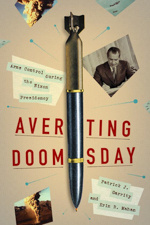 Today, we are happy to bring you our conversation with Erin R. Mahan, coauthor with the late Patrick J. Garrity of AVERTING DOOMSDAY: Arms Control during the Nixon Presidency, which we published in association with the University of Virginia’s Miller Center of Public Affairs.

It’s a bitter sweet book release as I continue to feel the loss of my dear friend, colleague and co-author, Pat Garrity. Our book was in many ways his idea, but our mutual fascination with the complex and often misunderstood President Richard Nixon made me eager to embark on the project with him. Pat was one of the most brilliant, humble and generous scholars with whom I’ve collaborated. I miss him. I know he’s proud of our work.

This book was a natural outgrowth of over twelve years of collaboration with my co-author, Pat Garrity, on transcribing Nixon presidential recordings and our first co-authored project, also published by UVA Press as part of their digital imprint Rotunda, Nixon and Arms Control: Forging the Offensive/Defensive Link in the SALT Negotiations, February–May 1971. I had also mined the documentary record of the Nixon administration for eight years while working in the Historian’s Office at the Department of State. This book project seemed like a natural extension of our previous research pursuits, using it to pull together and analyze the vast amount of primary source materials we had been steeped in for years. Averting Doomsday is the culmination of our joint and individual research endeavors.

I expanded my own knowledge of all categories of Weapons of Mass Destruction, especially regarding chemical and biological weapons, and I hope our readers will do likewise. I also learned just how rich the arms control landscape was during the Nixon era. I believe most people would be hard pressed to say what the Seabed Treaty was about or have awareness that it was Nixon who renounced America’s offensive biological weapons program.

When you have been steeped in Nixon era research as long as Pat and I, it’s difficult to be surprised. I had researched the SALT and ABM agreements during my years working at the State Department, so I left those chapters to Pat; I embarked on chemical and biological weapons and nuclear nonproliferation to expand my own knowledge. I was a tad dismayed at just how permissive Nixon and Kissinger were regarding other countries developing nuclear weapons. I was also a bit shocked to learn about the full extent of this country’s (as well as nations such as the former Soviet Union) biological weapons programs in the early decades of the Cold War. If I’m surprised at anything, it’s that the world has not had more chemical and biological weapons incidents thus far.

I don’t have a favorite anecdote per se. Rather, I have favorite quotes from Nixon and his top advisors; we placed many of these under chapter titles. My chemical and biological weapons chapter, despite having few Nixon recordings on which to draw, had more scintillating and encapsulating quotes than I could place under the chapter title. For instance, in that chapter under the title, I used Secretary of Defense Melvin Laird’s telling quote about the need to iron out differences between CW and BW policies, but I toyed with using Nixon’s crude quip, “that jackass treaty on biological warfare” or his comment, “We’ll never use the damn germs, so what good is biological warfare as a deterrent? If somebody uses germs on us, we’ll nuke’em.”

As Pat’s unexpected death showed me, life planning is a precarious exercise. I will likely concentrate fully on my day-job as chief historian at the Department of Defense where I enjoy my duties as General Editor of the Historical Series of the Secretaries of Defense. I think I will expand my responsibilities and embark on writing the volume devoted to President’s Trump’s first secretary of defense, James Mattis, whom I deeply admire as both a decision-maker and a great intellectual. Throughout the Trump presidency, you read and heard many comparisons between Nixon and Trump. Historical analogies are often pat and misused; I want to research the Trump era with the same depth and breadth that I did the Nixon administration.