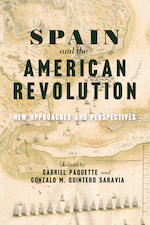 Today, we are happy to bring you our conversation with Gabriel Paquette and Gonzalo M. Quintero Saravia, editors of SPAIN AND THE AMERICAN REVOLUTION: New Approaches and Perspectives

We were pleasantly surprised by the number of brilliant early career historians are working on the topic. We feel fortunate to have their novel insights and well-conceived chapters in the book.

Too many to enumerate and describe, but here are two:

Gabe: I had never grasped just how miserable and frustrating John Jay's tenure as American emissary in Madrid actually was. I had known that the structure of geopolitics rendered him largely ineffective, but the degree to which he was shunned socially and continually stymied was striking. It made me all the more grateful for the incredibly generous hospitality and collegiality extended to me by Spanish historians since the beginning of my career as a scholar!

Gonzalo: Since the conference organized by the Sons of the American Revolution, which is at the origin of this book, I have been pleasantly surprised by the interest in the subject of the role of Spain in the American Independence War. An interest well beyond the ivory tower of academia, that reflects a new approach towards history in general. A more diverse view, which includes groups and actors that had been previously ignored or not fully recognized.

Gabe: I currently serve in an academic leadership position at the University of Oregon, so my scholarly projects will be neglected until the summer! In the medium and long term, I hope to collaborate with my dear friend Gonzalo again.

Gonzalo: I’m working on a book for a Spanish publishing house on the role of Spain in the American Revolution that I hope I can finish by the end of next year so it could be published in early 2024. Regardless of my short or medium term other plans, I wish I could start tomorrow working with Gabriel in whatever project he suggests.