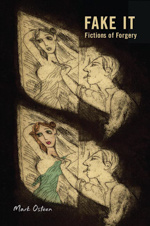 We're continuing the series with a conversation with Mark Osteen, author of FAKE IT: Fictions of Forgery.

I’ve been thinking and writing about questions of originality for two decades. The seed for Fake It was planted when I explored the links between forging (the kind a blacksmith does) and literary forgery in the works of Joyce and Dickens. A few years later I wrote an essay about art forgery in film noir, but the real trigger occurred in 2015 when I perused the materials about the Ireland Shakespeare forgeries at the special collections of the John Hopkins University library. Handling these fascinating old documents and studying this bizarre story—a teenager who forged a “Shakespeare” play and other documents to gratify his father—spurred me to write Fake It.

I would like readers to think of literary and art forgeries not merely as crimes or ethical violations but also as forms of creation that differ very little from “legitimate” creative works. The book shows repeatedly how forging fosters fresh authorial and artistic identities for perpetrators. Any forgery or hoax, I argue, is only as good as the stories that surround it; therefore, I hope readers learn that every forgery is both a story and a kernel from which other stories grow. Doing this research introduced me to dozens of literary and visual art works and to an array of colorful and compelling liars, frauds and cheats (and their victims). Studying their lives and careers shed a glaring light on our current political crisis and proved that self-delusion, confirmation bias, feelings of resentment, and mistrust of expert opinion are traits that con artists have exploited for centuries.

At first each forgery seemed unique, so I wondered how I could synthesize such a wide range of examples. But as I continued, resemblances and patterns emerged that enabled me to present the Fifteen Theses about Forgery that introduce the book. One of the most surprising discoveries was that forgers usually target specific victims; another was that not all seek to make a lot of money. I also came to understand the essential paradox of forgery: forgers and frauds crave recognition, and yet a forgery succeeds only if the forger is NOT recognized. Every forger in the book grapples with this conundrum.

There are so many that it is difficult to select just one, but here goes. Nineteen-year-old William-Henry Ireland had already forged several documents—including a will and other legal documents—that he signed with the names of Shakespeare and his real-life associate John Heminges. But when the lawyer Albany Wallace produced a document actually signed by Heminges, it looked like the jig was up. But no: young Ireland dashed to his office (where he kept his forgery materials) and returned with a new document and a new story. He blithely claimed that he had found a second document bearing a signature that resembled the real one. Then, with amazing chutzpah, William-Henry wove a whopper: there were two John Heminges in Shakespeare’s circle, he claimed, a tall and a short one. Short John had signed the document that Ireland had forged, Long John the real one. Wallis credited this cock-and-bill story, convinced that nobody could have pulled off such a stratagem in so brief a time. In fact, the young man had raced to his office, fabricated the new document, invented the explanation, and returned home with it, all in just 75 minutes. I came to admire the kid’s velocity as much as his audacity!

I’m editing the Library of American’s collection of Don DeLillo’s works. The first volume, containing his novels of the 1980s, is due out in fall, 2022. I’ve also written several other essays on a variety of topics—from James Joyce and Alfred Hitchcock to the Beatles and autistic artists —that are in various stages of the publishing pipeline. I’m also considering a book about jazz authorship, crafting some creative nonfiction pieces, and working on a novel.