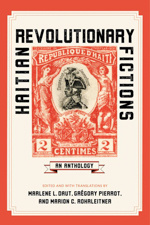 In celebration of the beginning of Black History Month, we are happy to bring you our conversation with Marlene L. Daut, Grégory Pierrot, and Marion C. Rohrleitner, coeditors of HAITIAN REVOLUTIONARY FICTIONS: An Anthology. Use promo code 10FEB22 through the end of February for a 30% discount on the book.

MLD: In my first book, Tropics of Haiti: Race and the Literary History of the Haitian Revolution, I utilized a very broad definition of the word “literary,” one that encompasses fictional, historical, legal, scientific, as well as epistolary writing. I began to note the frequency with which writers of fiction —  novels, short stories, poetry, and plays —  tried to represent the Haitian Revolution. There were more than 200 works of this nature, so I developed a bibliography to keep track of them, which I later published over at: haitianrevolutionaryfictions.com. Because this corpus of writing also stretched far beyond the many famous 19th-century fictionalizations of the Revolution —  Lamartine’s Toussaint Louverture (1850), Hugo’s Bug-Jargal (1826), Kleist’s Betrothal in Saint-Domingue (1809) — and spanned the Americas and western Europe,  I had the idea to create an anthology of Haitian revolutionary fictions, so that other people might have access to these writings too.

MLD: The Age of Revolutions was also an age of slavery, and the writings in this volume really underscore the efforts of fiction writers to characterize the Haitian Revolution as horribly violent— in service of preserving slavery— rather than righteously radical.

MCR: The insidious role creative writers can play in perpetuating anti-Haitian sentiment and promoting pro-slavery arguments via sentimental and melodramatic narratives; the way anxieties about miscegenation have shaped discourses about the Haitian Revolution; and the enormous relevance of these works for current debates about alleged violence in race-based social justice movements today

GP: I hope that in seeing the introduction and circulation of (generally racist) images and commonplaces across time and literatures, readers reflect on how the literary imagination helped shape the way white hostility to Black freedom expresses and excuses itself.

GP: Not a new surprise, but a continuing one: how once famous authors fall out of fashion and fame. It was a reminder that we routinely lose sense of the complexities of any given cultural moment. When it comes to the Haitian Revolution, I find the overlap of different forms of cultural erasure especially fascinating.

MLD: Henri Chauvet’s 1894 The Kiskeyans: The Kacik’s Daughter. I truly enjoyed reading the Créole and indigenous words sprinkled into the dialogue, and I found the comparisons made between the resistance of the first Haitians to the Spanish in the 16th century and that of Toussaint Louverture and Dessalines against the French to be resonant and imaginative.

MCR: Karl Spindler's 1830 novella The Haitian Groom: A Humorous Tale, in which two young German women first abhor, then compete for, and later return, reformed, to their disgust for the "Haitian groom" their uncle and cousin have chosen in order to punish them for their earlier reluctance to marry German men; the intertwining of sexism and racism, and the marketing of this story as a "humorous tale" are as fascinating as they are deeply disturbing.

GP: Finding out that the fairly common French expression “oncle d’Amérique”—a  person that miraculously gives you money when you need it most—came from a play evoking a fortune made not the United States, as I’d always thought, but Saint-Domingue!

MLD: I am working on two projects concurrently: an intellectual history of Haiti to be published with the University of North Carolina Press titled Awakening the Ashes; and a trade book about the first and last king of Haiti, Henry Christophe, under contract with Knopf/Pantheon.

MCR: I am finalizing a monograph entitled Transnational Latinidades, which explores the politics and poetics of translating, producing, marketing, and studying Latinx literatures in the European Union. My next project looks at the role of performance on the US/Mexico border as a critique of current immigration legislation and as a counterpoint to amnesia about US-foreign policy in Latin America. (58 words)

GP: I’m currently in the process of writing the introduction to the third volume of Échos de Saint-Domingue, a collection of French-language short stories about Saint-Domingue at L’Harmattan, in collaboration with Roger Little and Barbara Cooper.