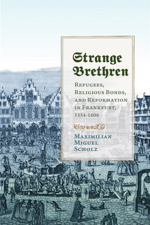 Today, we are happy to bring you our conversation with Maximilian Miguel Scholz, author of STRANGE BRETHREN: Refugees, Religious Bonds, and Reformation in Frankfurt, 1554–1608

I started this book at a time when Germany welcomed hundreds of thousands of refugees from Africa, Asia, and the Middle East. Politicians portrayed the moment as an unprecedented “crisis,” but my own family history contradicted this portrayal. My father had been part of a much larger resettlement of refugees in Germany after World War II. Then, looking back 500 years, I found refugees entering and challenging German societies even then. Refugees seemed, to me, a perpetual an essential part of German history. (Consider the refugees arriving in Germany from Ukraine today.) And while historians have studied the relationship between World War I and refugees or World War II and refugees, I wanted to understand the role or refugees in a much older German event, the Protestant Reformation.

I learned that refugees guided the Reformation. Many leaders of the Reformation were refugees including John Calvin, John Knox, John Laski, and John Winthrop, to name only a few. During their travails, refugees encountered different types of Christians, drawing lines between different groups like Calvinists and Lutherans. Lasting divisions among Protestants emerged. I hope readers will learn to appreciate refugees as complex historical actors rather than mere victims or objects of rescue.

The complexity of the term ‘refugee’ stunned me! This one word contains multiple meanings, many of them deeply personal. People have very strong opinions about what a refugee is and is not. My own grandmother, a refugee from the eastern parts of Germany, rejected the label “refugee” (Flüchtling) and insisted she was an “expellee” (Vertriebene). As Hannah Arendt put it, nobody wants to be called a refugee. Yet paradoxically, the label carries significant legal privileges. We need to be respectful and open to correction when using the term refugee.

When the refugees in Frankfurt first gathered to pray, native Germans peeked in through the windows of the church. Refugee worship became a spectacle! So many Germans crowded around to watch the refugees pray that the refugee minister complained to the authorities about the crowds distracting his faithful audience. (He preached for two hours minimum, and he needed undivided attention.)

Two things. I’ve started a new book on refugees and the formation of modern states across Europe. I am convinced that refugees altered not only religious institutions but also political institutions. They arrived in poor, underpopulated areas like Prussia at exactly the same time that these areas began to centralize and modernize. What role did refugees play in the formation of states?

I have also started a biography of an odd sixteenth-century refugee named Paul Speratus. Speratus was a Catholic priest who got married and, as a result, faced imprisonment and death. He fled across Germany and settled in a poor area called Pomesania, where he was elected bishop. He then sought to revolutionize Pomesania into a Christian utopia, but his efforts led to violence and the expulsion of his opponents.