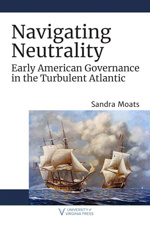 Today, we are happy to bring you our conversation with Sandra Moats, the author of NAVIGATING NEUTRALITY: Early American Governance in the Turbulent Atlantic. Professor Moats’s book is available as an open access eBook here, and we invite you to check it out after you peruse her interview.

As I was revising my first book, I came across a numerous letters George Washington exchanged with the French officers (such as Rochambeau and Lafayette) who had served with him in the Continental Army. These letters were exchanged after the American Revolution and continued into the French Revolution. The correspondence began in friendship, but assumed increasing importance as Washington and these French officers took on leadership roles in their nation’s politics. Understanding the significance of these letters and their influence on Washington led me to the concept of American neutrality.

I really hope readers will come to appreciate Washington’s tremendous skills as a political leader and statesman in guiding his divided cabinet through the formulation and then implementation of the neutrality policy. Much has been made of the disagreements between Jefferson and Hamilton, yet Washington transcended these disputes to produce a unified policy. Washington also led the efforts to enforce neutrality at home and abroad.

I found surprising the rich global and intellectual roots of neutrality, whether from Enlightenment ideas, European diplomacy, and even Russia’s response to the American Revolution. Additionally, I was stunned by the ubiquity of neutrality in American ideas and diplomacy throughout the nineteenth century and yet could not find a comprehensive historical examination of this seminal policy.

Thomas Jefferson attempted to resign from Washington’s cabinet soon after the Neutrality Proclamation was issued. As secretary of state, Jefferson would play a leading role in enforcing this policy, yet Jefferson wanted to distance himself from an administration he saw as increasingly Federalist. Washington wanted to retain the bipartisan unity that had produced the proclamation, while limiting Jefferson’s efforts to undercut it. To this end, Washington invested considerable time and energy in persuading Jefferson to remain in the cabinet, including paying a visit to Jefferson’s country home and praising him as America’s most experienced diplomat. Washington succeeded in convincing Jefferson to remain in the cabinet until the end of 1793 and ensured that the young nation spoke in a single voice in foreign affairs.

Two projects.  One concerns the political culture that was created in the aftermath of the inconclusive 1824 presidential election.  How did a younger generation of politicians demonstrate their worthiness and their stature to follow the founding fathers into the presidency? This project would focus on the presidential contestants and campaigns from 1828 to 1861.  A second undertaking focuses on America’s first political leaders: the men who participated in the first and second Continental Congresses.  Who were they, how were they chosen, what did they believe, what did they represent?